With the school year wrapping up and summer being just around the corner, my spare time to write these blogs has returned.

For this installment, I will present a terse overview of some work from one of my classes. In particular, this post will cover a couple of empirical methods I used to investigate whether Quantitative Easing had any causal effects on long term yields, with the focus on medium to long run effects.

One of the stated goals of QE is the lowering of interest rates. With a low interest rate, businesses can borrow and invest in capital, boosting long term growth. Likewise, consumers can borrow and spend at a higher rate than before, boosting nominal spending. This shift in the aggregate demand curve should help spring the economy out of recession faster than if the economy was left to run its course. So the question remains, does the Federal Reserve have the power to sway interest rates, and more specifically, is QE the tool to do that?

From a bird’s eye view, it doesn’t appear that QE lowered interest rates. It actually seems that QE raised them. Obviously, distinguishing causality from mere correlation is key here. 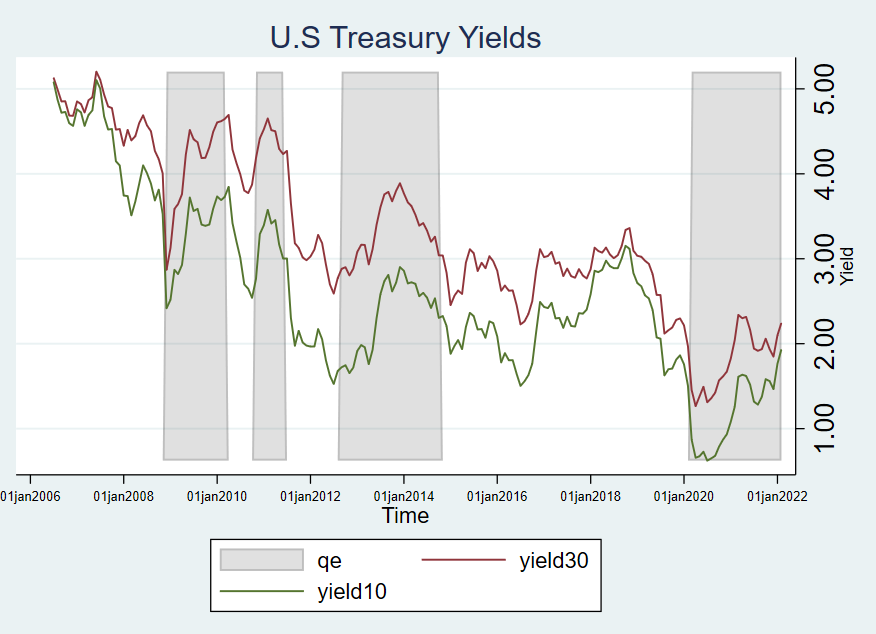 Relevant event studies in the academic literature have shown rather conclusively that QE did indeed lower long term yields. However, what event studies lack is a wide enough time window to allow for lower yields to manifest themselves into stimulative real economic impacts. The problem being if yields fall one day because of QE, but the next day they bounce back up, businesses and consumers don’t have enough time to take out loans to increase the money supply or boost the economy. Thus, a wider purview is necessary.

My first test to see whether QE had a significant impact on yields was through the construction of a dummy variable model. If the inclusion of the dummy in the model was significant, it would posit evidence that QE significantly altered yields.

I included some controls in the model, and included a lagged term to account for autocorrelation. I also de-trended both the yields so I could account for the long term decline in yields. My model took the form as shown below.

Where my response variable is the de-trended version of either the 30 or 10 year yield. My explanatory variable is the lagged yield. EUD is my control for economic conditions via 3 month Eurodollar Future rates, and QE are my four dummies for each QE period.

I ran a regression for the 30 year, 10 year, and the difference between European rates and American rates. [I will touch on this interest rate differential metric in one moment] Ultimately, All of my results were insignificant and most pointed in the positive direction, contrary to the mainstream view of QE. So, when you account for the long term decline in interest rates QE had an inconclusive impact on yields.

My next model was much more rigorous, and stems from a relatively novel method of analyzing interest rate policy. The rationale for this analysis stems from the increasingly interconnected and globalized economy that has emerged since the 1960s. In the developed world, interest rates tend to follow one another, as they are all affected by global economic conditions.

With that in mind, I use German yields as a proxy for the Eurozone because German bonds are typically regarded as the safest and most pristine European asset, so they are the European version of the U.S Treasury bond. We can see there is a disconnect around 2013, which was at the same time of the European Sovereign Debt Crisis, but prior to that they moved in lockstep.

Well, when we have two time series that move in such a pattern, we can statistically test for what is known as cointegration, formalizing the existence of a long term trend. If we can establish that a long term trend exists for Eurozone and American yields, then we can test for any structural breaks or divergences in the relationship during periods of QE. Because remember, Europe did not engage in QE until 2014. Thus, a divergence could be argued as the result of QE.

If the difference between two trended time series is stationary, then we can say that the two series are cointegrated. I found that the time series above was stationary by performing the Augmented Dickey Fuller Test. Now I can formally test for cointegration.

So my hypothesis goes as such, if QE had a significant impact on domestic yields, then the relationship between U.S and Eurozone yields should have been augmented or temporarily broken.

Here is a zoomed in version of the previous time series. As we can see, the difference between U.S and German yields grew throughout every QE period, meaning U.S yields rose vis a vis Europe, the exact opposite of what we would expect had QE been effective.

To statistically test for cointegration, I performed the Johansson Cointegration Test between German yields, U.S yields, and their exchange rate. My results confirmed that there is a cointegrated relationship between the three. My long run model for the 10 year takes the following form:

Essentially, when U.S interest rates fall, the EUR/USD exchange rate raises, causing the dollar to depreciate. This makes sense intuitively, but isn’t too pertinent to our discussion.

Now that I’ve established this long term relationship, I can test for a structural break and see if any appear during the periods of QE. A break appearing during QE would lend credence to the effectiveness of QE.

To test for this, I take cumulative sums of the recursive residuals to see if the residuals begin to deviate at certain points in time. If I find any parameter instability in my model, then there is probably structural instability in the time series. 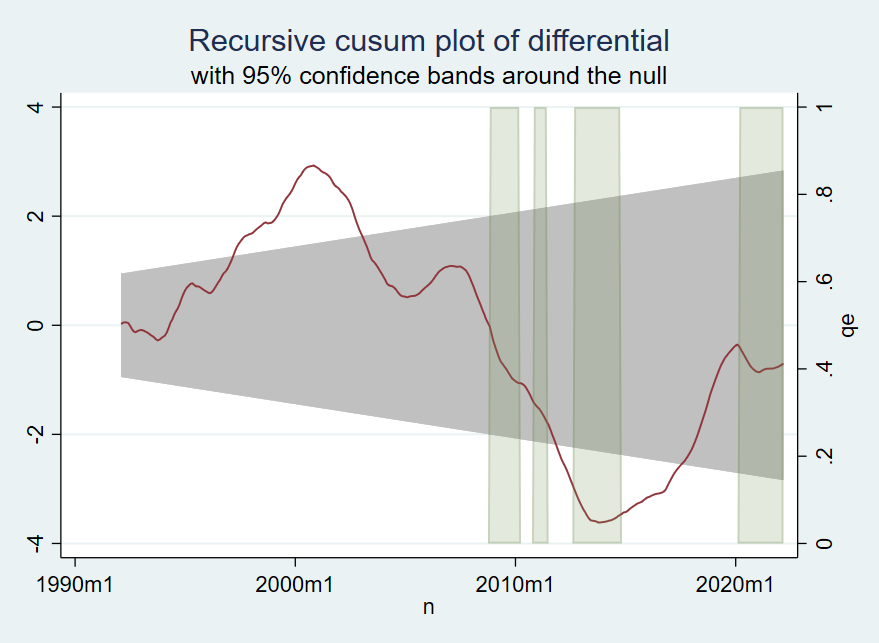 The red line crossing outside of the 95% confidence band suggests parameter instability. Looking at the 10 year residuals, we can see that around 2000 and 2012 there appears to be structural instability in the long run relationship between Eurozone and domestic yields. These can more than likely be explained by the recession of 2001 and the early rumblings of the European Sovereign Debt Crisis. 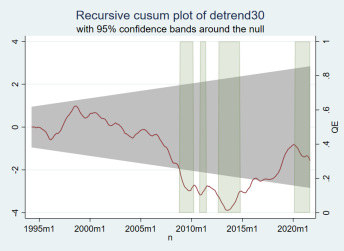 Shifting our attention to the 30 year residuals, structural instability does appear right at the announcement of QE1, and it persists all the way through QE3. This result lends credibility to the claim that QE caused a structural break. However, similar to the 10 year residual plot, the decline of the red line precedes the announcement of QE. So it could very well be that outside influence like the Great Financial Crisis caused this distortion. Alas, its difficult to say definitively.

There is a growing body of research that impugns the idea that QE is the sort of omnipotent policy that has become the rote tool of the Fed. While there is much to be improved upon in my work, my results tentatively suggest that crediting QE to the decline of interest rates is rather inane. Once you account for transatlantic interest rate trends the impact of QE appears not to have any lasting impact on long term yields.